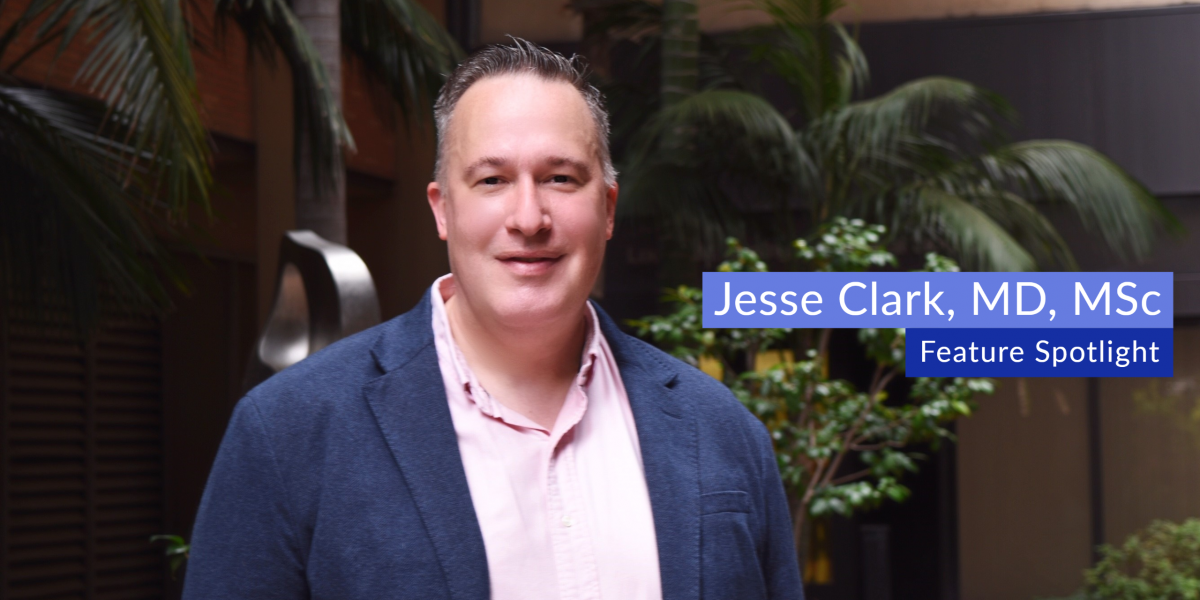 Posted on May 22, 2020 Categories Feature, Spotlight

Jesse Clark, MD, MSc, is an Associate Professor-in-Residence in the Department of Medicine, Division of Infectious Diseases, and Department of Family Medicine. A member of the CHIPTS Combination Prevention Core, his research focuses on questions of HIV prevention and STI control among men who have sex with men (MSM) and transgender women (TW) in the Americas.

Jesse came to UCLA in 2005 after finishing medical school and completing an Internal Medicine residency at Albert Einstein College of Medicine/Montefiore Medical Center in the Bronx, NY. Before beginning his Fellowship in Infectious Diseases, he planned to spend a year in Lima, Peru working under the guidance of Dr. Tom Coates where he began to explore the epidemiology and prevention of HIV and STIs among MSM and TW in the area. Halfway through the year, Jesse met his future husband and remained in Peru until 2015. While there, he worked to develop UCLA’s satellite office in Lima and to create the UCLA South American Program in HIV Prevention Research (SAPHIR). As Director of SAPHIR, he has had the pleasure of mentoring many future HIV researchers, several of whom he has proudly watched develop into independent investigators in their own right.

In his own work, Jesse focuses on the introduction of new diagnostic and prevention technologies through the social and sexual networks of MSM and TW. Collaborating with partners at the NGO’s Via Libre and Impacta, alongside the Universidad Peruana Cayetano Heredia, recent projects in Peru have explored: Use of TW social networks to support uptake and adherence to PrEP; Utility of nucleic acid screening for rectal STIs as a platform for delivery of an integrated biological-behavioral HIV prevention intervention to high-risk MSM/TW sexual networks; and Partner management for STI control in high-risk networks as a strategy to limit HIV transmission in the larger population.

After returning to Los Angeles in 2015, Jesse joined the team at Vine Street Clinic where he has contributed to studies of new HIV prevention tools through the HIV Prevention Trials Network (HPTN). Working on trials of antibody-mediated prevention and long-acting injectable PrEP, he has enjoyed the opportunity to work with Vine Street’s dynamic research team in their community-based approach to problems of HIV, STIs, and substance use. He has also initiated work on contingency management as a strategy to target the intersection of HIV and substance use in local MSM populations.

Outside of work, Jesse enjoys spending time with his husband Marcelo and their dog Lola, traveling, going to the theater, listening to music, and reading. A few of his favorite authors are J.M. Coetzee, Patrick Modiano, and Alejandro Zambra.

Each month, we’re featuring a member of our CHIPTS family and their work! To see past spotlights, check them out on the spotlights page  and make sure to check back to see who we feature next!