MONTREAL — To put it bluntly, talking to teenagers about sex is awkward.

But one Montreal group will try to engage the city’s youth in a serious discussion about sexuality — not in a classroom or through the use of a grainy VHS tape. AIDS Community Care Montreal is asking sexually curious teenagers to send them their questions about sex via text message. 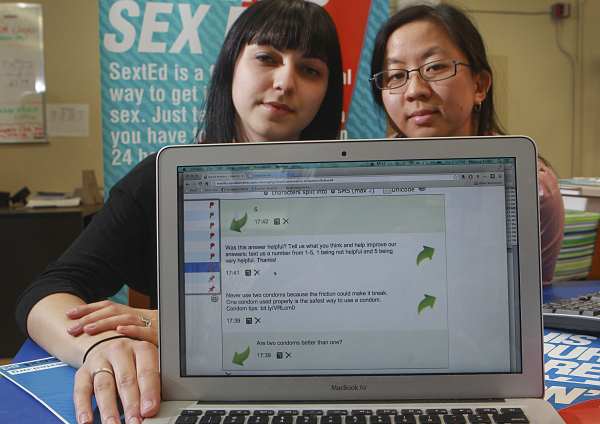 “Sext ed” is the latest community-based initiative to try to fill the void left by Quebec’s ministry of education, which removed mandatory sex ed programs from public high schools in 2005. Project founders say they decided to upend traditional teaching models and reach out to youth directly on their cellphones.

“The obvious advantage of this is that it provides the person with anonymity and maybe makes it easier for them to ask a question without feeling judged or ashamed,” said Melissa Fuller, one of the project’s coordinators. “Often, youth have questions they don’t want to talk to an adult about. I mean, I’m now an adult and I don’t want to talk to adults (about sex). Also, people feel like they should know things already or they’ll be made fun of for the questions they ask.”

The project “soft launched” last month after contacting several high schools and community organizations. A wider launch is set for May 14 at ACCM’s headquarters on Plessis St. near Parc Lafontaine.

The questions people text to the service are reviewed by a volunteer, who researches the ACCM’s database and consults with sex ed professionals before sending a reply. Because the reply can only be 160 characters long, it includes a hyperlink to a more detailed response that allows users to access educational tools and resources on their own.

To ensure anonymity, the user’s cellphone number is scrambled and given a random number so that the person fielding questions can’t know where the message came from.

Fuller says the ACCM has been working on getting the Sext ed project off the ground for about a year. The lion’s share of the work has been assembling a guide of more than 1,000 frequently asked questions about sex that volunteers and users can consult at sexted.org.

“We went on a lot of Internet forums to see what people are asking and we used a lot of the questions people ask us when we do workshops,” said Fuller, also a sex columnist and former councillor at the Concordia Student Union. “For the questions we didn’t anticipate, we do more research and we add it to our database. It’s a constantly evolving process.”

Answers deal with subjects like where and when to get tested for sexually transmitted infections as well as safe sex practices. They can address pregnancy and other medical questions, but also the emotional side of sexuality, which Fuller says is too often overlooked by traditional sex ed courses.

“A big issue about not being educated about sex is that most people don’t know how to recognize unhealthy physical and emotional relationships,” Fuller said. “So we’re ready for questions about consent and we know that the questions may reveal themselves in subtle ways … It’s really important for us that the people texting us know there’s a caring person on the other end of that message. They need to feel supported.”

Experts say the need for comprehensive sex ed is backed up by a dramatic spike in certain types of STIs observed in Quebec and Canada over the last 10 years. For instance, a 2012 study conducted by Quebec’s Health Department found that the rate of chlamydia among young adults rose by 60 per cent between 2001 and 2011. Instances of syphilis and gonorrhea also saw a significant surge during this period.

Perhaps the most telling detail the study revealed is that the majority of teenagers in Quebec are having sex, and not all of them are using condoms. In the case of CEGEP students, the study found that about 67 per cent of respondents don’t always use a condom during sex with a “regular” partner, and about half said they don’t always use condoms with “occasional” partners.

Fuller says the ACCM has already been dealing with a handful of Montreal high schools and community groups and will expand its outreach program when it officially launches the service next week. Sext ed will also provide school teachers with tool kits on how to talk about sex with their students and what resources are available.

The organization has also been in touch with CEGEPs as well as Concordia and McGill University.

“The goal is to be in as many high schools as possible but also to be available for older students as well,” Fuller said. “People still have questions when they get to university. In fact, they may be even more shy to ask them because they feel ashamed for not knowing. We’ve been in touch with the resident advisers at Concordia University and they’re very receptive.”

Contacted by The Gazette on Tuesday, a spokesperson for Quebec’s Health Department said the government is working on implementing new, more comprehensive sex ed programs in the future. But the official could not say when details of the plan would be announced or give a rough estimate as to the amount of funds set aside to pay for it.

“I don’t think the government is malicious or anything; I think this is a conversation that’s difficult to have so that makes it easier to forget about,” Fuller said. “We wish there was better sex ed in high schools but we’re also happy to do what we can to help.”