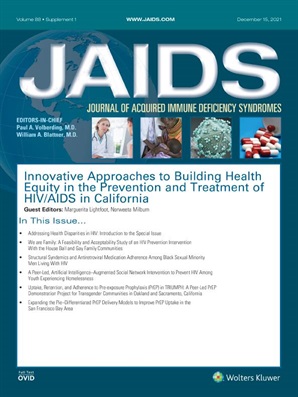 CHIPTS Development Core Director Norweeta G. Milburn, PhD, and Marguerita Lightfoot, PhD, have recently completed a special issue of JAIDS: Journal of Acquired Immune Deficiency Syndrome entitled Innovative Approaches to Building Health Equity in the Prevention and Treatment of HIV/AIDS in California. The special issue draws upon the work of the California HIV/AIDS Research Program’s 2015 funding initiatives to support research centers and demonstration projects to address health disparities in HIV. Excerpts from their Introduction to the Special Issue supplement article are below. View the full article here.

Addressing Health Disparities in HIV: Introduction to the Special Issue

Racial and ethnic minority, sexual and gender minority, and low-income people have historically experienced poorer health outcomes and poorer social conditions that lead to poorer health outcomes (social determinants of health) than nonminority people in the United States. To eliminate these health disparities, intentional and targeted interventions that address the needs and preferences of diverse populations are needed. This special issue describes interventions that aimed to increase linkage to and engagement in HIV-specific prevention or medical care, each uniquely tailored to the needs of an identified California population with disparate HIV-related health outcomes and each for implementation at a specific stage of the HIV prevention and care continuum.

In 2015, the California HIV/AIDS Research Program (CHRP) launched 2 funding initiatives, totaling more than $18,000,000: the first to fund the development of HIV-Related Health Disparities Centers within CA-based Centers for AIDS Research, and the second to fund demonstration projects (both behavioral interventions and biomedical clinical trials) of “pre-exposure prophylaxis (PrEP) for HIV Prevention By and For the Transgender Community” in CA. These funding opportunities were designed according to key principles of community-based participatory research. For example, each study team was required to form a partnership with at least 1 community-based organization that had an existing service relationship with the target population, and establish that partnership either before or during the planning stage of the research project, to ensure inclusion of their views in intervention design and outcome assessments.

Taken together, these funding initiatives aimed to (1) jump-start a statewide effort to close the gap of HIV-related health disparities; (2) set the HIV research agenda on course to directly address health disparities; (3) establish the efficacy of multiple interventions to improve HIV-related outcomes for the identified target populations, including the first large-scale trials of PrEP for transgender persons; and (4) facilitate collaboration between academia, government, community, and industry and among 3 University of California campuses.

The six research centers that were funded under these initiatives are outlined below:

The UCSD HIV Disparities Center worked with members of the faith community, HIV-positive women experiencing syndemic exposures (ie, histories of substance use, mental health disorder, trauma, intimate partner violence, and others), and African American persons living with HIV who were out of care. The team held public faith-based HIV educational events with DJs and gospel choirs and offered free HIV testing; held community HIV research summits; and hosted the 2020 National CFAR meeting. This center also developed a two-way Community Partner Registry in which community-based organizations (CBOs) could request assistance with technical skills usually limited to academia, including grant application writing and data collection methods, and UCSD researchers could contact CBOs to identify potential study sites and/or study participants. To aid in recruitment and retention across multiple studies, the team established a social media management system through Hootsuite and a transportation system to bring volunteers to the clinic with direct billing through Lyft Concierge.

The UCSF HIV Disparities Center engaged scientific leaders to host multiple symposia on HIV-related health disparities (with a particular focus on homelessness), form a coordinated regional response to HIV, and host the 2020 IAS International Conference on HIV/AIDS. Locally, the UCSF clinical trials addressed the needs of young people (aged 18–29 years) living with HIV and who had histories of substance use in 1 trial and members of the House Ball community in Oakland and the wider Bay Area in another. The youth-focused project, known as Y2TEC, established a Youth Advisory Panel at the start of funding, which proved to be critical to its success: an initial face-to-face clinical encounter was added to the study design before onset of the mobile application-based intervention on the suggestion of the Youth Advisory Panel, and research participants reported this session to be important to them. Moreover, at UCSF, the We Are Family project, built on long-standing relationships between academic investigators and members of the local House Ball community (generally young sexual minority people of color who form families of choice and provide social support and/or housing), held group educational sessions hosted by the community partner (CAL-PEP), cohosted balls (glamorous events with participant competitions), established a mobile application-based support system that strengthened community cohesion, and hosted mobile HIV testing events.

The San Francisco Department of Public Health (SFDPH) PrEP By and For Transgender Persons Center, in partnership with 5 local clinics, developed and implemented the STAY Study, an innovative demonstration project that evaluated PrEP uptake, adherence, safety, impact on sexual risk behaviors, and potential interactions between the PrEP medication (tenofovir disoproxil fumarate/emtricitabine, or TDF/FTC) and gender-affirming hormonal therapy among transgender persons in the San Francisco Bay Area transgender community. This team piloted the use of PrEPmate, a mobile health intervention using MSM text messaging to promote adherence to PrEP medication and retention in PrEP care. As a result of working at multiple local clinics, they demonstrated that offering a decentralized PrEP-only clinic that was independent of primary care led to a rapid PrEP enrollment, including among those at greater sexual risk of acquiring HIV. Testing multiple social marketing campaigns, they found that campaigns that showed PrEP in the context of the beauty, vibrancy, and resilience of transgender and nonbinary communities were more acceptable than messages that sensationalized HIV and the promise of prevention. Continuity of care and medication provision are provided as part of peer navigation services at postintervention follow-up visits.

The UC San Diego PrEP By and For Transgender Persons Center conducted studies to address knowledge gaps of PrEP in transgender individuals for: (1) linkage and engagement of transgender persons to PrEP, (2) measuring and testing methods to improve adherence to PrEP, and (3) determining whether there are differences in TDF/FTC pharmacology for HIV-uninfected transgender persons who are taking gender-affirming hormonal therapy. The team conducted 2 primary studies: a randomized controlled clinical trial to evaluate the ability of a transgender PrEP outreach worker (T-POWr) to link HIV-uninfected transgender persons to PrEP providers; and a randomized controlled clinical demonstration project to determine whether the use of a text message–based adherence intervention (iTAB) plus a telephone-based, brief, motivational interviewing (MI-b) intervention improve retention in and adherence to PrEP compared with iTAB alone in transgender/GNC persons. Multiple substudies examined the interaction of gender-affirming hormonal therapy and PrEP and their effect on biomarkers of each; the role of resilience, social support, and coping skills in PrEP adherence; and (c) the impact of STIs, inflammation, and the vaginal microbiome on genital tenofovir (TFV) levels. Three new studies have arisen from the parent CHRP grant, further examining the interaction of gender-affirming hormones and PrEP when used by transgender persons.

The UCSF PrEP By and For Transgender Persons Center launched the TRIUMPH Project or Trans Research-Informed communities United in Mobilization for the Prevention of HIV. The team developed a PrEP delivery system and implemented a PrEP uptake and adherence intervention within a network of clinics and community-based organizations designed specifically to serve transgender communities and determined the feasibility, acceptability, and effectiveness of both. Their i-BrEATHe substudy assessed (1) the pharmacokinetics of daily oral tenofovir disoproxil fumarate/emtricitabine (TDF/FTC) in transgender women and transgender men, using directly observed therapy; (2) determined whether TDF/FTC drug concentrations were lower among transgender women who were using feminizing hormonal therapy and among transgender men who were using masculinizing hormonal therapy compared with historical controls in non–trans men who have sex with men without hormonal therapy; and (3) determined whether daily oral TDF/FTC was associated with comparable rates of adverse events (AEs) in transgender women and transgender men compared with historical controls in nontransgender MSM. A follow-on study of the implementation of the TRIUMPH intervention has been funded by NIH.

Persistent disparities in HIV incidence, prevalence, access to care, and other HIV-related health outcomes in California and the United States indicate that remediation efforts have been insufficient. To begin to mitigate these disparities and bring more equity to health outcomes, new ways of doing public health research must be adopted. The California HIV Research Program set out to demonstrate a new model for collaborative planning and implementation of public health research to address these persistent disparities across many highly specific populations throughout CA. We fostered collaborations, jointly developed a detailed research strategy, strengthened community ties to academia, and built capacity at local community-based organizations, all of which resulted in an extraordinary set of data, capabilities, and public health innovations. The cross-sector community collaborative model that these 6 groups codesigned served as a home for multiple community-based participatory research projects, each addressing diverse and marginalized groups at risk for or living with HIV. Including those groups in the research from its very formation was necessary for it’s success; the overarching aim of bringing equity to health outcomes among those communities was explicit from the beginning. As researchers and health planners look to the future, adopting this cross-sector framework of community engagement with unequivocal goals of diversity, equity, and inclusion at the planning stage could help to move us all toward ending the HIV epidemic, together.