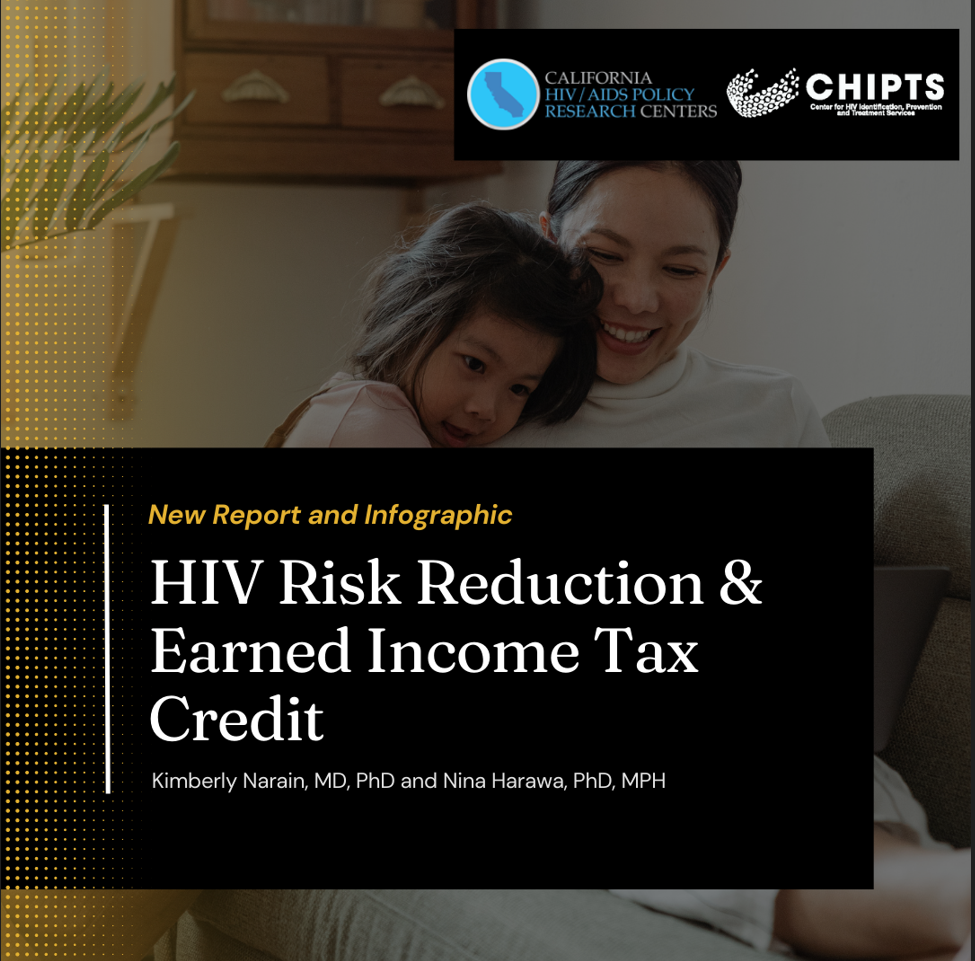 The California HIV/AIDS Policy Research Center (CHPRC) in collaboration with the Center for HIV Identification, Prevention and Treatment Services (CHIPTS) shared some newly published findings that are both exciting and impactful to efforts of ending the HIV epidemic and beyond. This published paper and accompanying infographic, is the first to examine the relationship between a state Earned Income Tax Credit (EITC) and HIV risk behaviors among single mothers in the United States.

In the United States, the generosity of each state’s EITC differs from each other, with many states lacking an EITC. In states with more generous EITCs, the study found, HIV risk behaviors decreased significantly  in single mothers compared with single mothers in other states with less generous EITCs. The effect of a refundable state EITC on HIV risk behavior was what we would expect for two or more hours of intensive HIV risk-reduction counseling, an intervention few low-income single mothers can readily access.

These findings demonstrate the impact of anti-poverty policy interventions: the straightforward act of distributing cash aid to those in need. These policies became more common during the pandemic, but have expired in many cases. For example, the monthly Child Tax Credit which lifted millions of children from poverty (source). Additionally, a reduction in HIV risk behaviors lowers the risk for other ailments such as pelvic inflammatory disease, cervical cancer, and liver cancer.

The published paper may be accessed by following this link. Additionally, CHIPTS has created an accompanying infographic, in collaboration with the California HIV/AIDS Policy Research Center (CHPRC). The infographic entitled “HIV Risk Reduction & Earned Income Tax Credit, ” provides insight on the following:

Note: The finding of a negative association between state Earned Income Tax Credit generosity and a composite measure of HIV risk behavior is particularly important given that the population observed in this study is at high risk for contracting HIV.

Please find a copy of the infographic and additional resources, available for download below:

We hope that you can review the infographic and publication and share the important findings with your networks. Help us circulate this important work to your networks! Share on social media below:

NEW Infographic from @CHIPTS and @ca_hiv_policyrc: Single mothers in U.S. states with more generous Earned Income Tax Credits (EITC) engaged in significantly less #HIV risk behaviors compared to those in states with less generous (or nonexistent) EITCs. The effect of a refundable state EITC on HIV risk behavior was what we would expect for two or more hours of intensive HIV risk-reduction counseling, an intervention few low-income single mothers can readily access. This finding demonstrates the impact of #antipoverty policy.