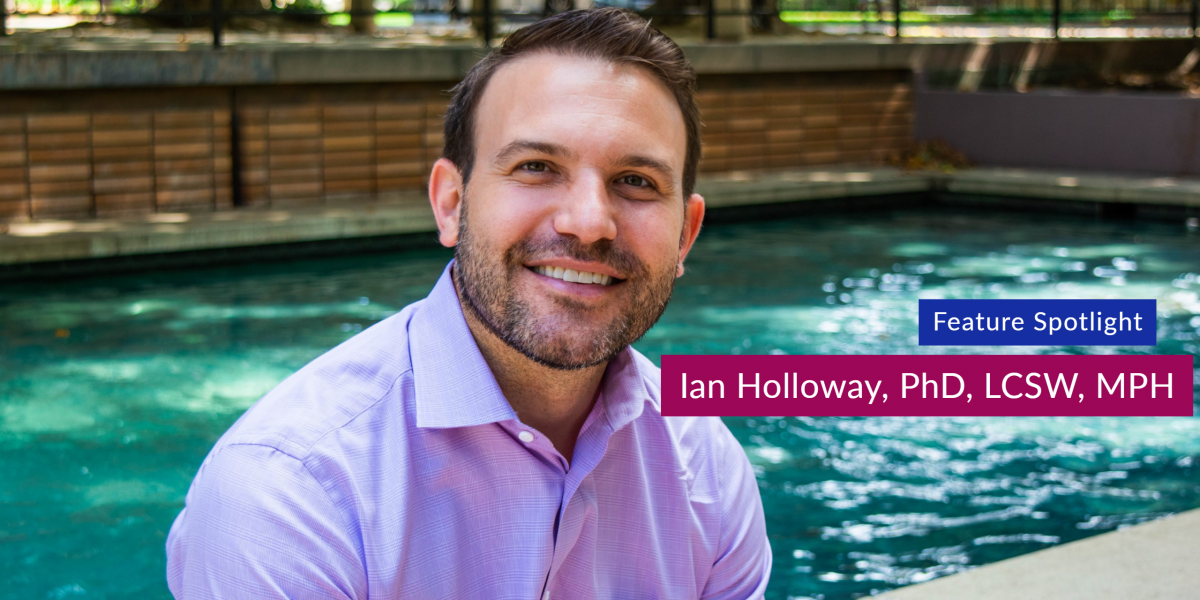 Ian W. Holloway, PhD, LCSW, MPH is a licensed clinical social worker and an Associate Professor of Social Welfare in the UCLA Luskin School of Public Affairs. His applied behavioral health research examines the contextual factors that contribute to health disparities among sexual and gender minority populations. He is particularly interested in how social media and new technologies can be harnessed for health promotion and disease prevention. Ian is also a member of the CHIPTS Policy Impact Core and Director of the Southern California HIV/AIDS Policy Research Center, an interdisciplinary center which brings the most relevant and timely evidence to bear on California’s efforts to develop and maintain efficient, cost-effective, and accessible programs and services to people living with or at risk for HIV/AIDS.

After completing his undergraduate degree at the University of California, San Diego, Ian moved to New York City and began volunteering at Gay Men’s Health Crisis (GMHC), one of the oldest AIDS service organizations in the country.  As a member of the GMHC hotline staff, Ian developed a passion for serving his community, which prompted him to enter a dual master’s degree program in social work and public health at Columbia University.  This is where he gained his clinical training to work with gay and bisexual men struggling with a range of challenges, including substance use, depression and anxiety, HIV stigma, and body image issues. It was during this time that Ian became fascinated with research and the potential to develop and test interventions that could have a broad impact on gay men’s health.  Ian moved to Los Angeles to begin a PhD program in social work at the University of Southern California.  After graduating in 2012, he joined the faculty at UCLA.

Ian’s ongoing projects focus on understanding and addressing sexual and gender minority health disparities. In collaboration with colleagues from USC, Ian is conducting one of the first Department of Defense-funded studies focused on the mental health needs of active duty LGBT military personnel. He is presently Co-PI, along with Ayako Miyashita Ochoa of the LINX LA Study, a community-based initiative designed to test a mobile-app intervention to increase HIV treatment engagement for African American sexual minority men. In addition, Ian and his collaborators from the Los Angeles LGBT Center are funded by the California Tobacco Related Disease Research Program to study the trajectories of tobacco and cannabis use among diverse sexual and gender minority people living in California in order to inform future intervention programs.

Ian recently received an Avenir Award from the National Institute on Drug Abuse to develop a social media tool designed to offer highly personalized health information to prevent substance abuse and HIV infection among gay men.  He and his team built a library of nearly 12,000 data points made up of text phrases and emojis that correlate with offline health behaviors. His Avenir Award will be used to create a machine-learning system that will monitor social media interactions with participants’ consent, then send customized health reminders and other alerts via instant message.

In his spare time, Ian enjoys traveling with his husband, Felipe, and their two daughters. This summer their family spent a week in Mexico City where they enjoyed playing in Chapultepec Park, trying new restaurants, and visiting the pyramids at Teotihuacan. Their next trip to Bogotá, Colombia is slated for Spring, 2020.

Each month, we’re featuring a member of our CHIPTS family and their work! To see past spotlights, check them out on the spotlights page  and make sure to check back to see who we feature next!