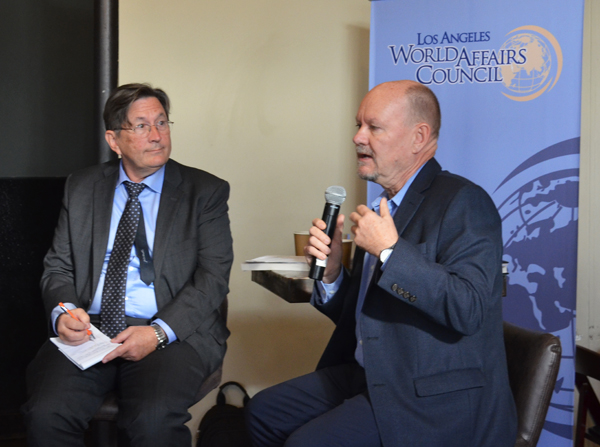 The American Opioid Crisis: A Discussion with Chris McGreal, Author of American Overdose

Our Center Director Dr. Steve Shoptaw moderated an event by the Los Angeles World Affairs Council titled “The American Opioid Crisis: A Discussion with Chris McGreal, Author of American Overdose” in Culver City on November 28th. Check out the summary from the event below!

This article originally appeared on the Los Angeles World Affairs Council (LAWAC) website. You can see the original article here.

Last year, thousands of Americans died from overdosing on prescription painkillers. The issue, says Guardian journalist and author Chris McGreal, is not just misuse, but over-prescription by doctors and a lack of proper regulation by the US Food and Drug Administration (FDA). McGreal was joined in conversation by UCLA professor and psychologist Steven Shoptaw.

The prescription epidemic started when big pharmaceutical companies successfully convinced medical boards and hospitals to include pain as a vital sign and that it had to be treated as a primary issue, opening the door for over-prescribing. Doctors are now pressured by hospital ethics committees to over-prescribe since being pain free is seen as a human right. On top of that, doctors often learn how to prescribe for a drug from the instructions that come with it, which are written by the marketing departments of drug companies, not by physicians. “Opioids are now the default treatment for pain no matter how weak or strong it is.”

When addicts are no longer able to get what they need from a doctor, they often turn to the black market, where the drugs are often provided by the cartels. The cartels realized they could acquire fentanyl from China, where it is manufactured legally, much cheaper than growing poppies to produce heroin and other opioids. As expected, there is little quality control and batches often contain a mixture of fentanyl cut in with other dangerous drugs, creating extremely lethal concoctions.

Another major influence on the opioid epidemic is the relationship between the FDA and big pharmaceutical companies. “Nearly 60 percent of the FDA’s funding comes from drug companies.” This financial reliance has fundamentally changed the way the FDA regulates medications, and they have frequently approved drugs that their physician and scientist advisory board has denied in the name of an open and fair market.

In October 2017, the Trump administration declared the opioid crisis a Public Health Emergency under federal law. Last month, President Trump signed the Support for Patients and Community Act with wide support from Congress and advocacy groups. The legislation takes aim at the crisis in a variety of ways including curbing shipments of opioids like fentanyl from entering the country, expanding Medicare coverage for treatment and freeing up the National Institutes of Health to conduct more research into non-addictive painkillers.

To read more about the opioid crisis, you can purchase a copy of McGreal’s new book American Overdose by clicking here.

Where Is the Opioid Use Epidemic in Mexico? A Cautionary Tale for Policymakers South of the US–Mexico Border